Below you can find instructions how to do this.

Clean the linear rods of X-axis with cloth (or paper towel) soaked with cleaning liquid. When your axes are clean, they should be lubricated with PTFE spray.

To do this, put PTFE spray on soft cloth or brush and distribute it along X rods. Be careful not to scratch the rods with too hard brush or cloth.

When the axes are lubricated, download X_axis_lubrication.gcode file and start it on your machine. Your X-axis should move from 0 mm position to 235 mm  and back to 0 mm, distributing the lubricate along the axis.

Clean the linear rails of Y-axis with cloth (or paper towel) soaked with cleaning liquid. When your rails are clean, they should be lubricated with PTFE spray.

To do this, put PTFE spray on soft cloth or brush and distribute it along Y rails. You can also spray it directly beneath Y-rails trolley.

When the rails are lubricated, download Y_axis_test.gcode file and start it on your machine. Your Y-axis should move from 0 mm position to 250 mm and back to 0 mm, distributing the lubricate along the axis.

Clean the linear rods of Z-axis with cloth (or paper towel) soaked with cleaning liquid. When your axes are clean, they should be lubricated with PTFE spray.

To do this, put PTFE spray on soft cloth or brush and distribute it along Z-rods. Be careful not to scratch the rods with too hard brush or cloth. Also, apply PTFE spray onto z-axis linear bearings.

Also you will need to lubricate Z-axis screws. To do this, apply PTFE spray directly onto Z-axis nut. Then start the Z_axis_test.gcode file from attachments and add some PTFE spray to Z-screw every 50-60 mm of movement. 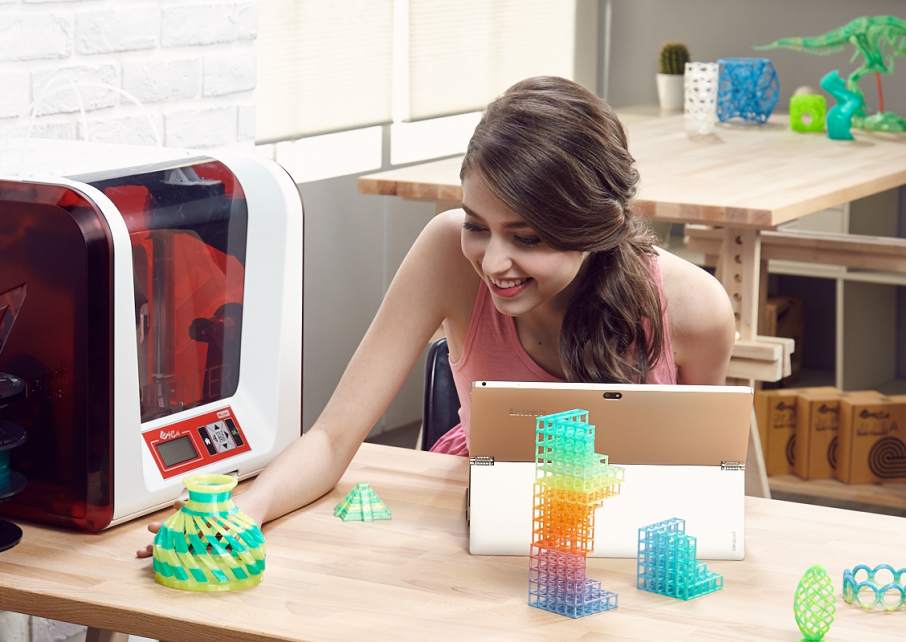 XYZ Printing have now released 3 new 3D printers to the market and a UV Curing Chamber.

In a statement on the release Simon Shen, CEO of New Kinpo Group who own XYZ Printing, says:

The da Vinci Jr. 2.0 Mix blends two feeds of PLA through one extruder. The filaments used can be any color, and use XYZware proprietary software either to add solid blocks of colour to an object, in “Multicolor Mode” or a gradual gradient throughout the 3D print, in “Mixer Mode”.

The maximum build volume is 15x15x15cm, and the nozzle is capable of reaching a resolution of 0.2mm.

For the same price , but a more professional approach, the da Vinci Jr. 1.0 Pro has adjustable temperature settings and an interchangeable nozzle to ensure compatibility with other filaments.

Maximum build volume is the same as the Mix at 15x15x15cm, but it is capable of resolution down to 0.1mm. The da Vinci Jr. 1.0 Pro also comes with a software upgrade to XYZware Pro.

Nobel 1.0A – a cost competitive SLA

XYZ Printing bring their trademark user friendliness to the Nobel 1.0A SLA 3D printer. This model upgrades XYZ’s existing Nobel model to 130 microns of X/Y axis resolution. The build size is also bigger than other SLA’s on the market, measuring a total of 12.8 x 12.8 x 20 cm.

Another additional perk to the Nobel 1.0A is an auto-refill system for the resin so Makers are never caught out with an empty bath.

Treating a ring 3D printed on a Nobel 1.0A for casting in silver.

XYZprinting’s UV Curing Chamber is a partner to the company’s Nobel range – though also usable with object 3D printed through SLA or DLP.

When creating resin prints for casting, i.e. in silver or gold for jewellery, it’s essential to have such a system to rid the object of any uncured bubbles of resin.

All XYZ Printing’s 3D printers are also compatible with MAC and PC operating systems and are operable via SD card.

XYZ Printing will be demonstrating this new range alongside a 3D printing toolkit for STEAM education, hoping to get more 3D printers into schools.

This filament guide will explain different cases about when and how to use filament. The scope of this will be the materials we recommend using and have the highest chance to succeed on our printers.

PETG(LEFT) AND PLA(RIGHT) ARE EASY MATERIALS TO USE FOR 3D PRINTING.

Although this sounds simple, reality is unfortunately a little less optimistic. For successful 3d printing, the general boundaries are:

Next to the filament itself we also have to consider the following constraints for dual head 3d printing.

A HOUSE PRINTED WITH PLA AND PVA TO SUPPORT THE ROOF.
THE PVA(TRANSPARANT) CAN BE WASHED OUT WITH WATER.

When combining different materials, normally the following should be true:

The following materials we offer have been found to be compatible:

*not a perfect match but can work under some conditions

Each material has it’s benefits and good use, we’ll explain the differences between the filaments in short. To make it easier to compare the different filaments we also gave them rankings (scale 1…10) on their most important features.

This is the best material to start with when you are new to 3d printing. It is made from renewable resources, like corn, sugar cane etc. Even though it is made from corn it is actually a very strong plastic when used below it’s glass temperature of 60 degC. For the printers prior the FELIX 3.0 we used PLA as material to print most printer parts with. In terms of stiffness it is higher than ABS, but it is more brittle and less temperature resistant. Besides the mechanical properties, it is very nice that this material is bio degradable. Under normal environmental conditions PLA hardly degrades, it degrades in high humidity and also at 90 degC. Even then it takes years before fully degraded. So this commenly used filament is also suitable for outdoor applications.

This is a very commonly used and often sold plastic apart from 3d printing. It is made from oil and used in many plastic parts in the household and countless applications. Even though it is popular it is not a recommended material to print with for the beginning users. Due to its relatively high shrinkage ratio it is difficult to print. The high shrinkage ratio makes an ABS printed object prone to warping. When 3d printing an object there will be a temperature gradient, the just extruded plastic is hot, but in the middle of the part the temperature is different. When printing material with a high shrinkage ratio it could cause a very high internal stress in the printed part during printing. This could cause the object to warp from the build plate or it could even crack during printing. A beneficial property of ABS is that it can be used at relatively high temperatures (approx. 100 degC) and that it is ductile. It is highly recommended to print ABS in a well ventilated room. The fumes which exhaust from it, can cause dizziness. Also it can be toxic when it melts at too high temperatures. Due to the constraints described above utilizing the full build plate with ABS is virtually impossible. The max recommended footprint is 100x100mm. The only proper way to print ABS is to print in a chamber with controlled temperature. This is how printers from certain manufacturers do it in the € 50K+ segment.

This is a very capable material for engineering purposes and more demanding applications. This is the enhanced version of plastic they use in drinking bottles. In terms of thermal properties this is the intermediate between ABS and PLA. The printability is just as good as PLA. It has a low shrinkage ratio, which makes it suitable for large prints. You can utilize the full build plate, without having to worry about warpage. We used this material to test our new extruder design, which was a quite demanding application in terms of temperature and required strength.

This filament is based on polyurethane. It is a nice material to use and it is as flexible as flexible silicone. This material is more challenging to print compared to the other materials, due to its flexibility. The print speed should be reduced to approx. 50% compared to PLA otherwise it could buckle inside the hot-end. When you got it printing it prints very reliably and it also is very flexible, but strong enough to not deform while printing.

Wood filament is a modified PLA that smells and feels like wood. Due to its PLA base, it is very easy to print. Varying temperatures, while printing, you can create the wood grain appearance. The wood grains make it more brittle than regular PLA, so it should be handled with care. The grains used are small enough to make it still compatible with our 0.35mm nozzles.

Is a crystal clear, strong, a bit flexible and easy to print filament for 3D printing. These characteristics, together with the high degree of gloss, very low water absorption, almost no warping and flame retardant properties make it a very special filament. The material is FCA (Food Contact Acceptable) approved. In short, a very diverse filament which can be used for many applications.

PVA dissolves in water and is environmentally friendly. After 10 minutes it already becomes weak. To fully dissolve it, takes one hour up to a few hours depending on the size. You can speed up the process by removing a large amount by hand and let the remaining to unreachable places dissolve. Also a sonic bath would speed up the process significantly. We have done extensive testing on this material type. It gives a lot of new possibilities, but due to the heavy interaction with H2O molecules, which are present in the air, the following things need to be taken into consideration.

The entire design has an organic, natural feel thanks to a slick stand topped with thin, translucent lampshades shaped like hollyhocks. Szarejko designed parts for a floor lamp and a smaller sconce, that could also be used as a chandelier. In both cases, a 12V power supply is hidden within the base of the lamp and provides power to all 3W LEDs through a series connection.

Modularity is the key feature of the 3D printed flower lamps made by Szarejko. They’re manufactured in parts, which gave Paula freedom to decide how tall the floor lamp should be, how big the chandelier, or how many lampshades they include.

It’s also possible to reshape these 3D printed flower lamps later on since the printed parts are joined with printed threads and not glue. The same goes for all repairs that can be done by simply printing and replacing a required part instead of the entire lamp.

3D printed flower lamps for every type of interior

3D printed flower lamps were made from PLA filaments. Paula used gray for the stand and translucent natural color for the lampshades. This combination made the lamps into elegant background decorations in her apartment but the design could also work with bright colors making them the central piece of every room.

The project was printed on ZMorph 2.0 SX using 1.75 mm Plastic Extruder. The designer also experimented with DUAL PRO toolhead and created colorful lampshades with the color mixing feature. Scaled down in Voxelizer software, these proved to be a perfect addition to a set of decorative fairy lights.

3D printing enables a new level of customization in interior design that can be expanded even further with ZMorph’s interchangeable toolheads for CNC milling and laser engraving. This wide set of tools enables designers and creators to make their own decorations, unique pieces like rotating bookshelves, and even 3D printed furniture.

This way every home, apartment, and room can become more personal and homey.